Start Your Own Psychometric Testing Center in Your City ! One Time Investment – Lifetime Earnings !

What is Psychometric Test ?

A Psychometric Test measures more than just self-perception, it measures actual behavior, because what people actually do is more important than what they say, or think, they do. And it compares those behaviors with  others, to give a real indication of an individual’s abilities, strengths, weaknesses and behaviors. So it will tell you whether, compared with other salespeople, or even the general public, this person is actually extroverted, deals well with deadlines and is motivated by competition – and how they are likely to perform on the job. It will also tell you what difficulties they might have and how to overcome them, giving them the best chance of succeeding and performing well in your business.

There are eight vital kinds of Intelligences by which one person differs from another. Though we have eight intelligences but each one is developed in a particular way that makes us unique and different from each other. Multiple intelligence theory asserts that individuals with a high level of aptitude in a particular type of intelligence do not necessarily have a similar aptitude in any other type of intelligence. In 1983, Harvard University (USA) professor Howard Gardner started writing his book Frames of Mind: the Theory of Multiple Intelligences with some simple but very powerful questions, viz., Are talented chess players, violinists, and athletes ‘intelligent’ in their respective disciplines? Why these and other abilities are not accounted for on traditional IQ tests? Why is the term intelligence limited to such a narrow range of human endeavors of Mathematical, Logical & Linguistic talents? So, According to this theory human intelligence’s can be broadly divided into eight (8) categories. 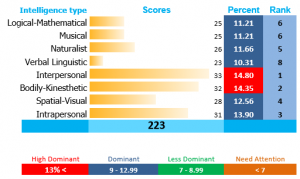 Walter Mackenzie (Multiple Intelligence Survey: 1999 – 2013) breaks down the eight intelligence’s suggested by Dr. Howard Gardner and categories  them into three domains that serve as an organizer for understanding the fluid relationship of the intelligence’s and how the intelligence’s work in combination with one another. 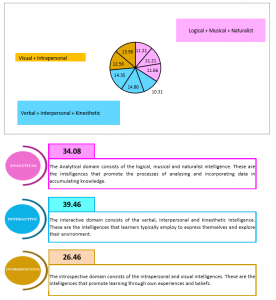 Holland Codes represent a set of personality types described in a theory of careers and vocational choice formulated by psychologist John L. Holland. Holland’s Theory argued that ‘the choice of a vocation is an expression of personality’ and that the six factor typology he articulated could be used to describe both persons and work environments. His typology provides an interpretative structure for a number of different vocational interest surveys, including the two measures he developed: The Vocational Preference Inventory and the Self Directed Search. His model has been adopted by the U.S. Department of Labor for categorizing jobs relative to interests. The six personality and work environment types described by Holland are usually referred to by  their first letters, taken together – RIASEC: Realistic, Investigative, Artistic, Social, Enterprising and Conventional. The six dimensions of this RIASEC model are actually derived from evaluation of the following 12 factors. Recognizing your main interests should enable you to better understand your aspirations and professional potential. 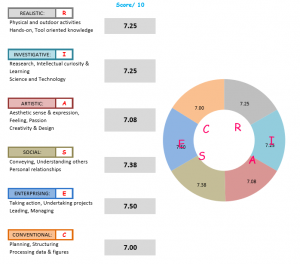 What All You Would Get on taking Schools Of Excellence –  Psychometric Package  :-

error: Content is protected !! All Rights Reserved With Schools Of Excellence